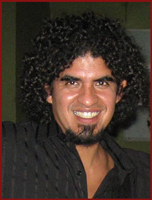 Welcome and Bienvenidos! Diego Ramirez is an exciting, extraordinary jazz pianist and composer who exudes talent, creativity and original jazz. His CD "El Ultimo Chilam Balam" was recently named BEST JAZZ ALBUM OF 2008 BY THE LA MUSIC AWARDS!! He calls these original compositions Mayan jazz, a beautiful blending of a modern art form with the music and sounds of his heritage. This work is also beautifully documented in a recent new video: "El Ultimo Chilam Balam - The Music of Diego Ramirez, A Mayan Heritage", which you can view on the video page.

Another CD, "The Portland Concert", is a recording of Diego's February 17, 2007 Premiere US Performance at the Portland Jazz Festival. The press was wild about Diego Ramirez!

"Solo Pianist Diego Ramirez played his U.S. debut and simply mesmerized the audience. His skill and composing abilities are exciting and extraordinary, and full of passion. You'll be hearing a lot more from this young man." Jazz USA online February 2007.

Diego Ramirez "demonstrated impeccable technique, a broad emotional and dynamic range, and an understanding of the jazz tradition. " His performance "demonstrated Ramirez's ability to traverse considerable territory, from a delicate touch to great power." By John Kelman, From All About Jazz online, February 25, 2007.

With his family and children, Diego is currently living and performing in Los Cabos, Baja California Sur, while creating and recording original new pieces. Diego delights his audiences with a wide variety of jazz...hot, cool, modern and traditional, standards, Latin influenced melodies and rhythms, indigenous explorations, a variety of his own compositions, as well as beautiful improvisations, all of which especially touch his audiences.

For further information, including Diego's calendar, please go to: www.sonicbids.com/diegoramirez.

Muchas Gracias for visiting and enjoy the music, videos, and photos!